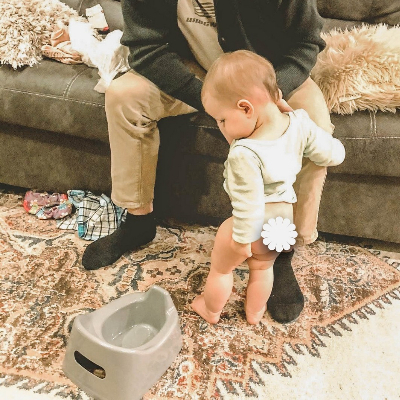 Would you love a roadmap detailing exactly what developmental + pottying milestone to expect when? Me, too! That’s why I created my new signature programs, and today I’m sharing a sneak peek! Hear when specific developmental milestones from 6 months to 18 months might happen, and how they mesh perfectly with specific pottying milestones (i.e., how they set you up for success!).

Links and other resources mentioned today:

Let’s talk about potty milestones: when will what happen? Today I’ll go through a couple things that typically happen for most, if not all, babies who are EC'd from birth to 18 months. By the way, it doesn’t matter when you start EC; typically, these milestones go hand in hand with developmental things that are going on.

You can find out more about all of this in my programs for different age ranges. There is one for newborns, one for mobile babies and one for young toddlers. The programs are in addition to my book; a deep dive into a specific age and stage only. So, if you need “blinders” to only focus on where you are right now, definitely get one of the programs.

In the programs, there is a roadmap that covers all these milestones. We covered a bit of this a couple episodes ago when we did “How Often Will My Baby Pee?” That's episode 198. You're going to see some similarities there, but right now, we're just focusing only on milestones. “When should I expect which pottying milestone to happen with elimination communication?”

At six months, most babies have or will be starting solids. This is pretty much the average normal age that people start their babies on solid foods. The milestone here is that the poop gets formed and it gets regular. What we love about this is that it's more predictable (unless you have a stealth pooper, in which case see my episode on stealth pooping). Most of you are going to have a lot more regularity come solid foods, and that is something to celebrate - and definitely a potty milestone. Because the poop changes, it's also a little bit different to dispose of it (easier or perhaps more difficult, but either way, you're definitely going to have to change something in your practice.)

The next milestone that happens with EC is at eight months old. Oftentimes, if you've been signing to your baby from birth, or even just started at six or seven months, babies will typically start to sign back around eight months. That's exciting, because they're able to not only look at you and grunt or start crying and look at you and wait, or start bearing down and give that “I really need some help here” face. Now they can actually directly communicate with you with the shaking “t” (the ASL sign for “toilet”), communicating, “hey, I need to go potty.” Or they can use whatever sign you taught them! But signing usually starts around eight months on average.

Next, between nine and ten months old, they may begin to try to mount their mini potty on their own, which is exciting…and also difficult (for the parent!) because if they're doing this on their own, they're going to want to do it a million times until they master it. If you have a nine to ten month old or a 12 month old or 14 month old, you know what I'm talking about, right? They're going to do the same exact thing 50 million times until they get it. So, this could result in not staying seated on the potty, which means you might need to change the receptacle location to the big toilet on a toilet seat reducer just for a little while. Then give ample time to practice mounting and dismounting the potty during non potty times.

The next milestone comes at about 12 months. A lot of babies will start to grab their crotch, diaper area, front or back side, or their bottoms as a signal. Yes, it could be a “sign”, sure, and there are differences between signs and signals, but why split hairs? The important thing is you're going to know they need to go because they're grabbing at their crotch, diaper, butt, front, etc. That's exciting, because again, more information with more communication equals more opportunities for success.

Also at 12 months, they'll probably start to mimic wiping. They've seen you do it for their whole lives (if you've let them in the bathroom when you go to the bathroom.) Maybe you've been giving them a piece of paper to practice. At this age, they're going to be really super-duper interested in blotting with the toilet paper when they're finished. That's really how you start to teach wiping. Give them a little piece of toilet paper. I would never leave the roll within reach for a 12 month old because they're just going to unroll the whole thing! Maybe use a little Kleenex box with just a couple of pieces of toilet paper in it. Have them grab some of that dab on the front first (if they’re a girl) and then the back, and drop it in. If it's a boy, they don't need to dab their penis, but they can dab their butts. They can practice. 12 months is around the age when they start mimicking.

Between 12 and 13 months, they start to dump the mini potty (with assistance!) and really want to do that. One of the coolest things ever. One time it rained at my house. The potty was outside on the porch, filled with water. My daughter brought it over and dumped it over the edge. She was about this age and I realized, “oh my gosh, we don't have to practice with pee. We can practice with water!” So, you can fill up your mini potty outside with water, have them dump it into a giant bucket or something like that and they can practice. Also, when they fill up the mini potty, say it's in your living room, have them pick it up and you just assist. You say all right, cool, go for it. You basically spot them like you're a rock climbing partner and your partner is bouldering. You're there just in case. You're there just in case the pee falls on the ground. So we want to spot them with assistance.

At 15 months, there are clothing manipulation experiments, like having three shirts on, or having half a pant on, or pulling off and on various articles of clothing at random times (that probably aren't socially acceptable!) We definitely want to support clothing manipulation experiments by assisting in any way possible. Getting the learn undies or learn trainers that I sell at tinyundies.com will help. Once they learn how to do those, they can transition from those to any article of pant clothing and be able to pull those on and off because the underwear teaches them how to do that.

Also around 15 months, hiding behind the couch is a good signal for, “I need to poop.” That is something those of us who have ever done potty training know. “Oh, he always hides behind the couch and poops.” Well, that's because socially, he doesn't want to do it in front of anybody else. So we take that as another wonderful additional signal that we can use or sign that we need to take them to the potty. Some people will put a mini potty behind the couch so that it's there and then just help them take their clothes off, let them poop behind the couch in the mini potty. Totally up to you.

Another milestone is at 18 months, they have slightly better wiping skills. If you've been working with them and training with them since they were one on wiping, they can do it slightly better by 18 months. I would never expect truly independent wiping until maybe two or three years old, although I have seen anomalies of this. It's just really more of a fine motor skill that just develops a little bit later. “Drip dry” is fine, and usually poop comes out pretty clean at this age if they're in a deep squat, which they are on my mini potty. So, no need to wipe a ton of a mess. Physiologically, is there a need to wipe thoroughly at those young ages? Not so much. So this goes with physiological development as well. Keep training!

Finally, at two to three years old, they're going to start going on their own accord. This could start as early as 18 months, or even as early as 13 months. I've had one child, 15 months old, telling me every single time they need to go. Usually, though, around two they're doing the full process of independent wiping and also changing their own clothing. Yes, there are differences between boys and girls - believe it or not! I have three boys and two girls, and I've helped hundreds of thousands of other families. Overall, boys are more physical, and girls are a little bit more aware of their cleanliness. Again, I've seen anomalies in this, but if you're chuckling while listening to this, then you know what I mean.

Hopefully this has given you something new today and helped you understand what's coming! Remember, all the milestones are detailed in depth on the “roadmap” that comes with each of my three in-depth programs. In the roadmap, you can visually see where all these things happen, corresponding with when to use which potty, which backup, how often they are going to pee or poop, etc.

That's it for Potty Milestones: When What Might Happen. I want to know what milestone you are in right now! Please go over to our show notes at godiaperfree.com/201 and leave a comment on the blog post. Also, if you have a question about the milestone you're at or understanding a portion of today's show, please ask your question over there as well. We love to answer and help you out and also hear any insights you have that I didn't cover in today's show.

Thanks so much for listening. This is the Go Diaper Free Podcast at godiaperfree.com. We'll see you next time.

If you want to watch me record today’s podcast episode, you can do that on my youtube version right here:

To help out the show and help more parents find out about EC:

What milestone are you in right now? Have any questions or insights to share?

I look forward to discussing with you in the comments, below!