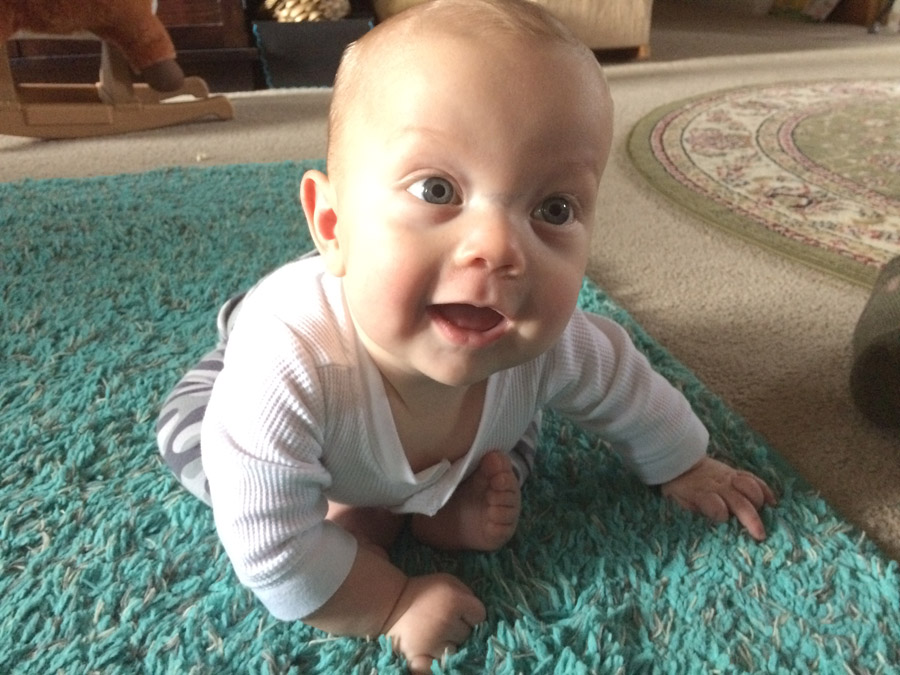 I re-learned a very important lesson today with my 3rd ECd baby. Even when doing Elimination Communication with a very young baby, things can get backed up. Constipation happens when moving to solid foods. Somehow I'd forgotten that!

Yes, the deep squat position of the EC hold is extremely helpful in preventing baby constipation:

Yes, having a good two-way communication about poop helps baby relax into the trust that you'll take him to the potty when he needs to go. Babies will wait for the potty.

And, yes, ECers typically catch most, if not all, of the #2s a baby makes because babies have a strong instinct to not soil themselves (who would want to mess their own pants?).

HOWEVER. Cooper, age 5.5 months currently, ECed from birth by this method, hadn't pooped for 2 whole days as of yesterday. We are one week into having solids twice a day (plus breastmilk 5 times a day and once at night.)

He was having loads of gas and seemed uncomfortable, with a disturbance to his nighttime sleep (waking 2-4 times a night instead of his usual 1 time). I was getting worried! (Although BabyCenter says I shouldn't worry til 3 days, it was affecting us negatively at 2 days, so I acted.)

I am going to cover a few other things first and then I'll tell you what happened when I pulled out the magic trick for curing our baby's constipation. It *really* {gasp} worked. More below.

When ECing a baby from birth or starting EC before 5 months in age, catching poos is fun. Breastfed babies poop more often than solid-food-fed babies. Babies tend to signal strongly for these soupy poops.

Most ECing parents catch the majority of these poops in the potty from a very early age. Things get into a rhythm with EC and right when you brag to a friend saying, "Oh yeah, he ONLY poops in the potty" about your 4 month old, you have a poop miss. And then...

I call solid foods a "disrupter" only because EC can go very, very smoothly until the time solid foods are introduced. (Which often corresponds with crawling...another disrupter.)

Let's talk about the timing of introducing solid foods for a moment.

At what age do you start solids?

Well, some start as a hard rule at no earlier than 6 months. I did that with my first baby. With my second, she showed all the signs of wanting to eat solid foods at 4 months, so I began pureeing foods for her, straight off our meal table, at that time. With my third, he also showed interest at 4 months and I began him at about 5 months (a few weeks ago) when I began to have time to cook for him post-holiday madness.

What are the signs that you can start feeding solids to baby?

Which brings me to the topic of what we typically feed at first.

...include pureed fruits and vegetables. Some also puree meats and whole meals after a few weeks or months. Some do baby-led weaning and let their children explore and "play" with their food as early as they see signs. Some chomp their own food and feed to baby with their fingers (though if you have gum disease or cavities, I'd avoid it).

So what are the constipation culprits in these? (Source: BabyCenter)

And now let's talk about EC and starting solids.

When doing EC from an early age, like I said above, we get used to catching all of the wet poops pretty consistently (if you don't, that is also normal, and fixable).

Since those doing infant potty training are very in-tune with their baby's pee and poo patterns (moreso than a person using diapers full-time), ECers typically realize there's constipation much earlier than others. (Not always the case of course, but this is my experience with our worldwide community of readers of my book.)

What I did for Cooper's constipation

So now on to the solution. Again, Cooper hadn't pooped for 2 days. He seemed uncomfortable. He had a lot of gas. It was disturbing his sleep.

Did these things warrant a constipation intervention? In my book, yes! If it's uncomfortable for him, I want to fix that pronto. I don't like my babies to suffer.

Turns out, a tiny bit of banana caused this discomfort.

What I did. I asked my sitter to pick up two packages of Plum Organics' Just Prunes pouches on her way over. Again, I'm making Cooper's baby food from scratch as I did with my other two, but I don't feel like making my own prune puree. So I bought this brand which I've trusted for years now: 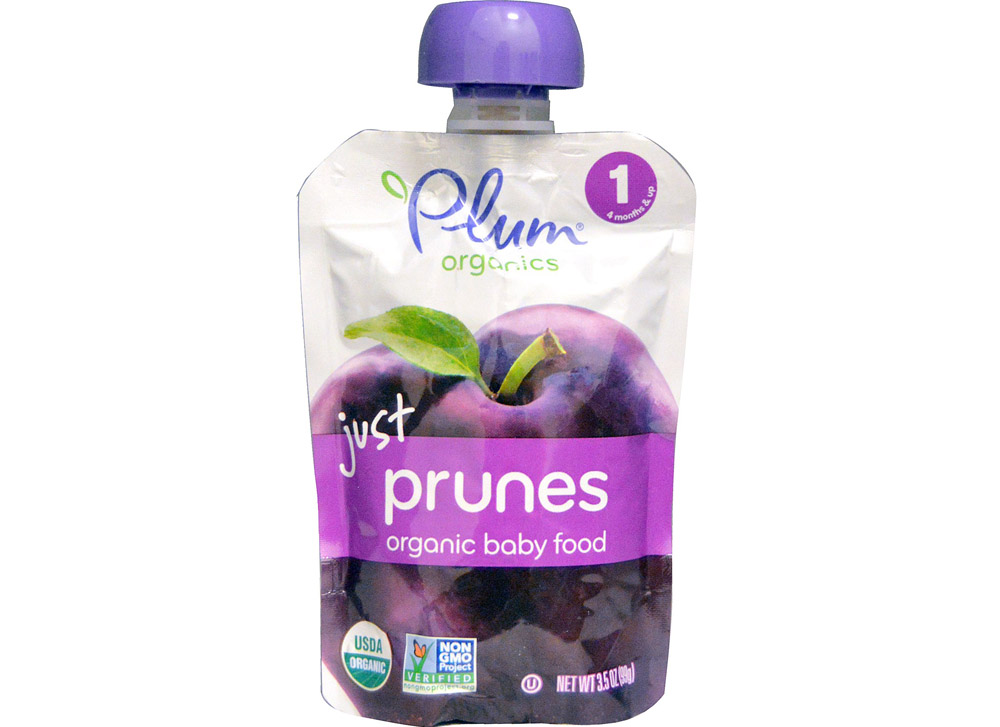 She fed him one entire pouch of pureed prunes, by spoon because doing it himself at this age was super-messy, and he slopped them all up like a pro. The whole pouch!

We gave the other pouch to my 2 year old because pureed prunes won't give kids the runs...it will just encourage a poop IF there is one there, and it will soften it to a comfortable, non-runny, level.

She left and I had some work to finish up on this website and my other, Tiny Undies, so I kept truckin. Cooper was in the room with me in the bouncer chair that hangs from the ceiling (his favorite device, by far).

He fussed. Clearly an EC pee signal, I thought.

But I chose to disregard it (because with EC you can sometimes choose to do it part-time).

Then he signaled again about 15 minutes later. Hang on Cooper, I thought. I'm almost done with this one task. The sitter's gone. You have to wait a sec. I told him "Mommie's coming."

Then he signaled a third time in another 5 minutes. Okay, okay...you got it. I'm finished.

I scooped him out of the chair and he wasn't too happy.

He also felt WET...on his back.

I smelled it too.

Apparently he was signaling NOT for pee, but for that long-lost poop we were waiting for...it had arrived, and it gave some notice. Which I chose to ignore.

I apologized to Coop but I didn't bathe in guilt. These things do happen. They don't ruin EC unless I let them throw my vibe.

I put him on the bathroom floor on a towel, Isadora brought the wet wipes to me, and I attempted to undress him from this disaster.

I wanted to cut the shirt off of him with scissors, it was that bad!! Poop went on his hands, his arms, his chin (thank goodness not his face, but he was clearly unhappy about the whole bit), his chest!, belly, bottom, you name it.

It wasn't solid logs like it had been every other day before the constipation began, and since we started solids. It was softer and choppier, but not liquid as if I'd used a stool softener. So that was...good.

Anyway, I know you've all been there before! Wow! Especially having done EC for so long, I am spoiled to catch most poops across 3 babies. NOT TODAY!! Isn't it the worst to have to clean up a full body poop explosion?

I wiped most of it off with wet wipes and then we three took a delicious bubble bath to do a deep clean.

Update since then. No other strange counter-effects.

He had a poop this morning, as this happened yesterday afternoon, and it was a regular solid-food-fed poop - like a tiny Yorkie doggie turd - so I guess I'm a little sad that our days of EBF (exclusive breastfeeding) and the associated "easy breastmilk poop catches" are over.

How will starting solids impact EC? (To-do's for you!)

And that is that. I hope that sharing our story of baby constipation, EC and constipation, and remedies will help some of you out there. Do you have anything to add to this topic? If so, please post them to the comments below. We all have such vast knowledge to share.

Potty Time Mastery: a minicourse that helps you get extremely good at detecting the 4 ways to know the baby has to pee

Posted in Advice, All Topics, Benefits, Blog, How-to, Stories, Troubleshooting
← When EC Stops Working: The Elimination Communication “Potty Pause”Resistance: My baby resists the potty and pees on the floor right after. →