This post was originally posted on May 11, 2016, and has been fully updated on June 29, 2021 to include an audio (Podcast) version, a video (YouTube) version, and to include some basic updates. Enjoy! xx Andrea

Listen to the Podcast

If you want to watch me record today’s podcast episode, you can do that on my youtube version:

This week's guest post is from Robin Kinney, our EC Coach in Madison, Wisconsin. I love how Robin has learned how to weave EC with potty training and I hope you are inspired by her story! xx Andrea

How bending the rules, believing in your child, and finding the right kind of support can make all the difference in your potty training experience.

When my son was 9-months-old, a friend invited me to join a playgroup that met every Wednesday morning. Finally, at 13-months-old, my son dropped his morning nap (OK, I may have encouraged the transition a bit) and I was able to join the playgroup. I was new to the community, I didn’t know many people, and it was winter in a small town, so I desperately needed a reason to leave the house to socialize.

A little back-story before I tell you what happened at the playgroup...

I first witnessed Elimination Communication (EC) when I was 8 months pregnant and I was hanging out with a friend and her 6-month-old daughter. She was part-time EC-ing her daughter based on natural timing and transitions.

At every diaper change, my friend would hold her daughter over a tiny potty and make a “psss” sound. And to my surprise, the baby would pee! I decided then that I wanted to do EC with my baby. I purchased Andrea’s book “EC Simplified” (now titled "Go Diaper Free") and studied up.

My son’s first year of life proved to be way more challenging than I expected. It started with a tongue-tie, which led to round the clock pumping and exhaustion. Then we moved, twice, leaving Oakland, CA, and ending up with my in-laws in northern Michigan.

Over the course of my son’s first year, we flowed in and out of EC as I felt that I could handle it while trying to make sense of my new life circumstances and not getting pee on my in-laws’ carpet.

So back to the playgroup.

When my son was 13-months-old, at the playgroup, I noticed that there was another boy there about 18-months-old. Every now and then, his mother would take him to the bathroom and return a few minutes later.

Eventually the subject of potty training came up in conversation and she explained her method to me, which was really a combination of ideas from various websites. This was her second child and she did a similar potty training method with both kids.

I asked her, “How did you decide to start potty training so young?” which is the more polite version of the more common: “Isn’t he young for potty training?” She replied that she read somewhere that the golden age for potty training was between 20-30 months. Curious about her answer, I decided to do a little research for myself on the topic.

So, as my son was 13 months old and I was witnessing an 18-month-old during his first few weeks of potty training, I realized that I had never connected the dots between Elimination Communication and potty training. But now I was ready to figure out how to get from one to the other.

When I went back to my copy of Andrea’s EC Simplified I followed the link to “Oh Crap! Potty Training.” by Jamie Glowacki. It just so happened that Oh Crap! was not available for download at that time and was not available in print yet either.

I was disappointed, so I visited Andrea’s website to see if there were any other recommendations. I had no idea that Andrea had written a potty training book OR that she had a new edition of her EC book, Go Diaper Free!

If it wasn’t for that publishing company black out, I might not have ever found out about The Tiny Potty Training Book. So I downloaded the book, read it, and pulled out my calendar.

I start thinking to myself:

“My son is 13 months old now. We’re moving (again?! I know! Right?) when he will be 17 months old. Andrea says you can start at 18 months old. But we’ll be in a brand new city and I have no idea what our lives will be like.

So, I could wait a few more months to get settled and start around 20-22 months old. Or I could potty train before we move while I still have the extra support of my in-laws…” 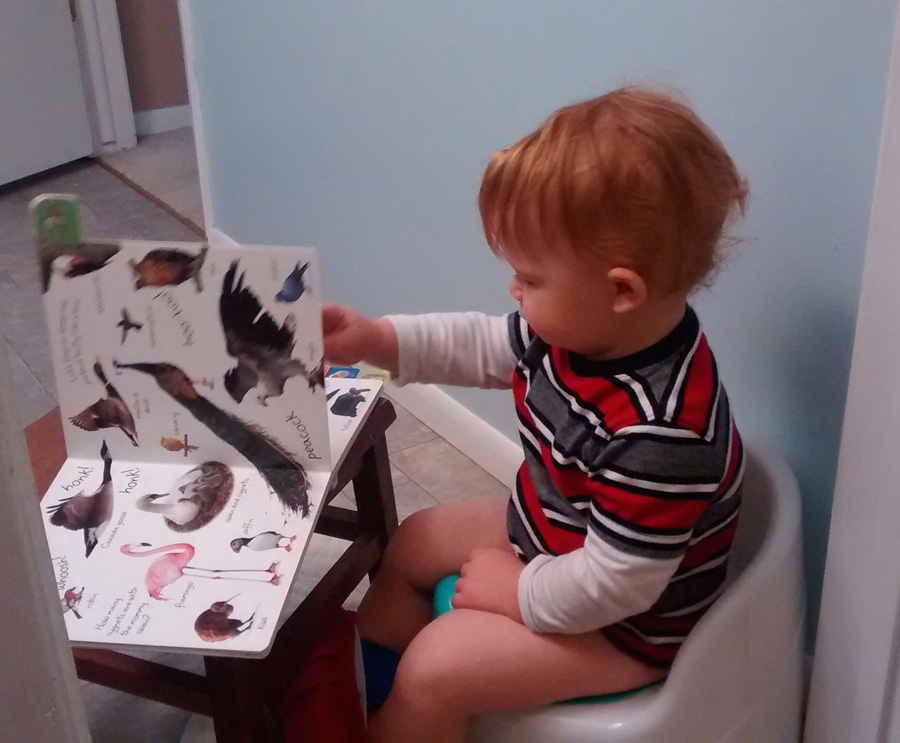 Rather than have my son spend 7-9 more months in diapers, I decided that I would break the rules and potty train at 15.5 months old.

We chose Sunday May 3, 2015 to be the big day to say goodbye to diapers. This was the day after I would celebrate my wedding anniversary with a night away from kiddo and hopefully be rested enough to give all my energy and attention to potty training.

This gave us about 2 months to master potty training before moving.

Potty training was not easy - I don’t think it is ever easy for any family. Changing habits is hard work for both the toddler and the parents! But it worked.

We followed the steps outlined in The Tiny Potty Training Book, used the troubleshooting section of the book and the Facebook support group as needed, and my son was free of daytime awake diapers.

What it took for me to be "ready" to potty train

I believe I was able to successfully potty train my son at 15 months old because I had confidence in his capabilities, I had a clear plan of action, and I had support from my family and friends.

As I share my potty training stories with others, I usually tell them, “Kids are capable, are you ready?”

For me, potty training readiness was having a clear plan of action, support, and confidence in my son and myself.

What do you need to feel ready? Please share in the comments below.

Hello! I’m Robin. As a Go Diaper Free Certified Coach, I want to spread the knowledge of Elimination Communication and Early Potty Training to my new community. I’m looking forward to working with families in Madison, WI and surrounding communities through classes, free support groups, and private consultations.

Posted in All Topics, Blog, Potty Training, Toddlers, Troubleshooting
← What Would an Indigenous Person Say About Pottying Their Baby?My baby hates sitting on the potty but always pees outside easily. What should I do to help my baby pee inside more often? →