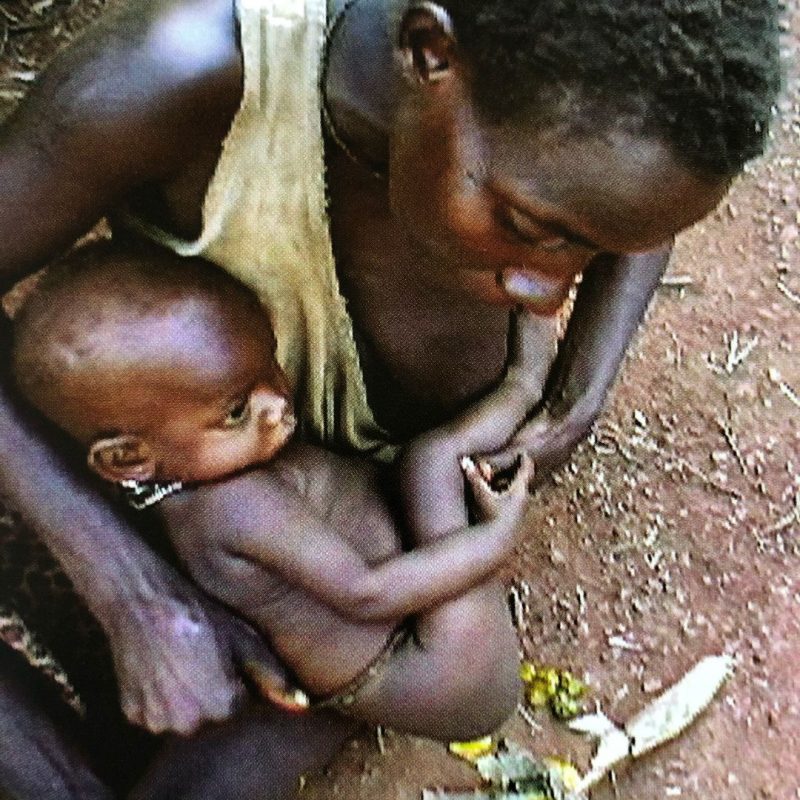 What would an indigenous person say about pottying their baby? How do babies go diaper free in indigenous cultures? Do babies even wear diapers in intact communities and third world countries?

Today I answer Emily’s question about the attitudes indigenous women have toward pottying their babies in third world countries...and I try to pull together the pieces of what we know today.

Q: It’s hard to think of a question, after reading your very thorough book. I guess sometimes I wonder what the attitudes towards EC are in other countries–not just the practice, but the attitudes. For instance, it’s such an EC thing to mention China and India and the Amazonian tribes from The Continuum Concept, and to say that oh, they just hold their baby over a trash can/a bowl/a pot/something, cue, and that’s that. But if you asked a mother who has culturally inherited an EC practice, will she explain a philosophy behind it, especially in contrast to diapering? Or is “Elimination Communication” as a philosophical concept truly branded/packaged for a Western, diaper-dependent audience? What would she say about why she does it? ~Emily P., currently in Rabat, Morocco

A: Hey Emily! Thanks for submitting your question…it is indeed unique and one that I had to do a little research to fully answer (and I delayed its publication by a few days to fit this into my busy mothering schedule).

First of all, here are two photos of Emily and her little one that she wanted to share: 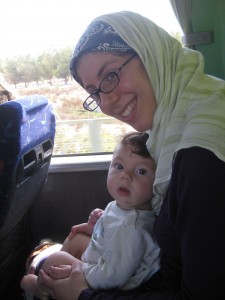 Emily ECing on the bus from the Casablanca airport to Rabat 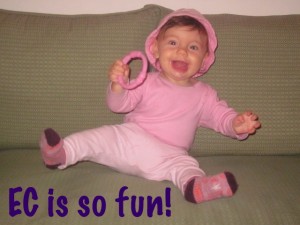 Hazel all pinked out

Okay, back to answering your question!

Unfortunately, I haven’t done any formal interviews with those who’ve inherited an EC practice…but I have spoken casually with folks during travels around the country and the world and learned a little bit. However, that wasn’t enough for me to confidently answer your post.

I wanted you to have something more substantial…so I turned to Laurie Boucke’s practically-encyclopedic book on EC, Infant Potty Training, where I recall having read multiple accounts of what we call “EC” with folks from intact societies and third world countries spanning Africa, Asia, South America, and other locales around the world.

What I discovered in Laurie’s book reflected what I was thinking based on my less formal research. Here it is:

What would the indigenous woman say about why she potties her baby?

I want to answer this part first because it helps to frame the rest.

In Infant Potty Training, the Xhosa tribe member and Tswana tribe member (both from Africa, both also Registered Nurses) both said that they learned how to potty their babies from their mothers, there is only one system of potty training that had been used and handed down for centuries, and that every female member of the family must cooperate and are expected to assist the mother in pottying her children (paraphrased from p.323-324, 2000).

A woman named Stella from a tribe in Uganda, Africa, said:

In Ugandan villages, children are toilet trained at a very early age, while they are still babies. Just like with everything else, children in villages develop faster than children in cities or in the Western world. We start by the 3rd month and finish before one year of age.

In Africa, children are always in the company of other people, grownups or bigger children, who are always ready to help them with everything, including toilet training. Because of this, the mother does not feel a lot of pressure for time or help with the training. Others take pleasure in helping.

This way of training is satisfying and enjoyable. It is part of life. It is our duty, and we do it with patience and love.

Everyone in the village knows the way to train the infants. The knowledge is passed from generation to generation.

Stella toilet trained 3 children, born to her in Uganda, in this manner by the age of 12 months.

She is saying that she did it because everyone knows it, it’s expected, it’s part of life.

For her and the two RNs mentioned above, there is no philosophy. Only tradition and following a societal norm.

Others who were quoted or interviewed for Laurie’s book Infant Potty Training mentioned some semblance of philosophy behind why they do it.

First off, many who do the “point and aim” method of intuiting a forthcoming pee and aiming the baby away from the body do it for cleanliness purposes. They don’t want to become soiled and have no diapers in the first place.

Generally, the “point and aim” method is used before crawling or walking, and is followed closely by the “teaching” portion of reinforcing where to go potty (generally, outside). This second portion, which begins when the baby becomes mobile, is modeled by older children and adults in the community. It’s first just “what we do” and second it’s taught “how far away from the house do I go potty?”

Thereagain there is no philosophy behind this second portion other than convenience.

It is necessary to keep their homes sanitary and clean.

Again, the social component of baby raising reinforces that “when I can move myself outside, I’ll do that because everyone else does.”

And, the teaching component of the second phase of EC in indigenous, intact cultures is necessary to make it even more convenient for the family to take care of the home…leading back to cleanliness as mentioned above.

So do the women mention a philosophy behind doing inherited EC in an intact, indigenous culture?

Nope. They sure don’t.

They do it for cleanliness and convenience.

They do it because that’s what their kin have always done.
There is no diapering culture to compare it to (yet) so they just do it as their duty, with pleasure.

Where there are some diapers now available, the philosophy becomes one of trying to save as many as possible, because they are expensive. So even the more affluent potty their babies to save money.

The Elimination Communication philosophy in the US

Yep, you guessed it Emily! The EC philosophy here in the US is indeed branded toward and packaged for a diaper-dependent culture.

That’s what trailblazers Christine Gross-Loh, Natec, Laurie Boucke, and Ingrid Bauer set out to do:

Bridge the gap between the diaper-dependent culture
and an alternative to diaper dependence that’s been practiced
in native cultures for over 200,000 years.
It’s absolutely packaged for our culture who have depended on commercial cloth diapers for over 150 years and disposable diapers for over 60 years.

Some bits and pieces of the United States’ Elimination Communication philosophy include:

I actually feel every single one of those philosophical points…do you?

Interestingly enough, buying into the above Western EC philosophical reasons can actually cause problems.

Some problems that buying into the Western EC Philosophies can cause…

Buying into these philosophies can make us feel superior to others who don’t practice EC.

It can help us to alienate our friends by believing we’re choosing a “higher path.”

It may cause us to put undue pressure upon ourselves to do EC perfectly (take it from me…perfection is impossible).

We may become very judgmental of ourselves, others, and the babies.

We usually become anxious and fearful.

We then operate from a place of confusion and lack of clarity.

How to get out of the philosophical trap

The best thing we can do under all these philosophical pressures is to realize we’re doing it, and then get some help staying grounded and continuing along with the process with ease and grace.

I know there are lots of resources out there, one of them being my book and forum where we help people get past the philosophical burdens and their own perfectionistic tendencies and actually do EC in a positive, productive way.

Even if you don’t choose my book, it’s important to note that we feel all of this from how we’ve presented EC in our culture.

It comes with a very light side and a very dark side.

So we learn to balance that.

Thanks so much for the intriguing question, Emily!

Hopefully I helped pull together some threads and somewhat answered your question.

Please leave your thoughts about this post in the comments below…I’d love to know what you’ve learned, what you think, and what you’ve experienced that relates to philosophies carried by both other cultures and our own.

PS - here’s the video version of this episode in case you prefer to YouTube it. ;)

I'm Andrea and I spend most of my time with my husband and 5 children (newborn to 8 years old) and the rest of my time teaching other new parents how to do Elimination Communication with their 0-18 month babies. I love what I do and try to make a difference in one baby or parent's life every single day. (And I love, love, love, mango gelato.)

72% of my readers wish they’d had this when they were starting EC!