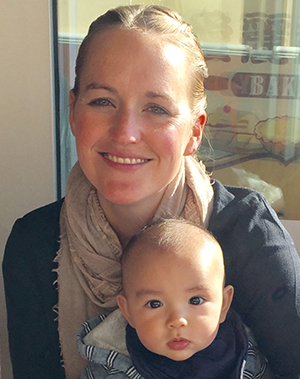 Andrea here! I just want to add before we begin that I, thinking I was the ONLY one who did this, have also been “catching” my monthly cycle in the toilet every night for about the past 2 years. I got tired of changing a reusable pad at night, hadn’t used tampons or regular pads for about 10 years, and just decided to go to the toilet every time I woke up at night and see what happened. With so many pregnancy and new-mom-inspired sleepless nights, let’s be real: I wake up A LOT every night, to this day! So, why not? Turns out that when I went to the toilet, my blood would all end up in it, so I pared down to just having a thin reusable pad at night, which is typically clean in the morning. It’s there as a “backup” for when I am not quick enough, or for when I have to run upstairs to a crying child and can’t go potty, myself, first. But it’s usually “clean and dry!”

So, when Jenn told me she wanted to write this article, I couldn’t believe I wasn’t the only one applying Elimination Communication (or infant potty training) principles to my moon cycle!

Without further ado, here is Jenn’s article on how she catches her menstrual blood in the toilet instead of elsewhere...and how that relates to EC.

SO I have been wanting to write this article for a while now, and it is going to possibly sound a little crazy, but it is worth discussing for many reasons. And while I can’t get into every reason here in this article, I want to share the key points and takeaways, as it may be beneficial and hopefully helpful to other mamas and women alike.

Before we get started I think it is worth mentioning a little bit of the back story. And please pardon me, as I will go into some details about my menstrual cycle and how this all came to be.

I guess you could say this started when I first got my period in high school. I have always had heavy periods. Well, that is partially true, when I got on birth control the periods did seem to get a little better, but they were still generally heavy. Heavy to the point that it wasn’t uncommon for at least one day during my cycle to bleed through my pants. At night, I would sleep with a towel under me to prevent any leaks.

It wasn’t until after I had my son, and my period returned and the menstrual bleeding got worse. It was typically on day 2 that a gush of blood would come out in so much quantity that my pads could not absorb it fast enough. Yes, even the super pads. Yes, even those commercial overnight pads, and yes even the natural overnight or super size kind. I tried many of them, and none could handle this. I think the tipping point came when I stained my bed with this unannounced gush one month. I could go into more details, but I will spare you. After that tipping point I decided that when my cycle came around again I would try to ‘catch’ the gush in the toilet, instead of having it be in my pants or rushing to the bathroom with me holding my crotch as the pad did its best to hold the blood in.

Much like we do with EC, I began to track my menstrual cycle, I paid closer attention to how I felt. With the help of apps, making general mental notes, and paying attention to how I felt in my yoni throughout the month, I was able to know when my period was coming. And eventually I even learned how to ‘catch’ these gushes.

The first thing most people wonder or ask is ‘how’ did I know when I was going to bleed? What were the ‘cues’? I would get this sensation in my yoni area that something was about to leak out. Or I got a feeling that it was about to happen, what is referred to as intuition in the EC world. So, when I would wake up with this feeling, instead of lying in bed, I would get up, rush to the toilet and “catch” the majority of my blood into the toilet. This saved my sheets, my pjs, my bed, and for the most part a huge mess. Plus, much like EC, it is rewarding!

After a few cycles of paying close attention to my bleeding, I realized one day that my yoni needed some air, it had been a heavier period, and being in pads for 24 hours a day, 5 days straight it needed a break. See in the past my bleeding would be almost non-existent at night, that I would be able to sleep commando. Yet, that hadn’t been the case since my son was born. So needing some air for the yoni, an opportunity presented itself to see if I could go all day catching my menstrual blood in the toilet instead of relying on pads, so I decided to go for it. I decided to go commando and free bleed…. and I have to say it was in fact FREEING!!

During this ‘observation time’ of my free bleeding, I realized I don’t bleed constantly all day like I thought. The blood isn’t coming out constantly, but rather it flows out in a semi-cyclic time. Yet it was during this ‘observation time’ that I became more in tune with when I am bleeding or about to bleed. It was here that I found that often bleeding happens with pee. Isn’t it so nice of nature to align that for us! It was also during this time that I specifically found that if I have to pee, I often need to bleed. Not always, but most of the time. So when I am on my period and when that first feeling arises that I need to go to the bathroom, I go, so that most of the blood ends in the toilet.

It wasn’t before long that I realized I was using the Philosophy of EC to catch my menstrual blood. The same principles we apply to EC can be applied to our own bodies and menstrual cycles: observation times, discovering and listening to cues, and aligning catches with these discoveries...

So how has this been beneficial? Well, for one, I really do use less pads, and my pads are way more dry. Hardly do I have a moment now where I am walking to the bathroom in a soaked pad or worried I have a blood stain on my ass. The other benefit is the relationship and respect for this time each month has changed. As a monthly bleeder in our patrilocal society, I used to be embarrassed and ashamed if I ever leaked, I hid pads and tampons when going to the bathroom, as if it was something to be shameful of. Now, instead of dreading this time, I feel empowered. We bleed, and it is natural, it is normal!

So why do I recommend this for any monthly bleeder? Because awareness and knowledge is empowering. There is nothing more empowering than working with nature instead of against it.

So now, even though my ECed son is about to be five years old, and has been fully potty trained for three years, I am still using the philosophies of EC. The connection I’ve found with myself is just as incredible as finding that connection and rhythm I had with my son when practicing EC.

Jenn, thank you so much for sharing this wonderful article about how we can apply Elimination Communication principles of working with nature, observation time, and paying attention to our bodies to our menstrual cycles. I hope this episode helps LOTS of women simplify their lives!

NOTE: I might now try this during the day! Let’s try together, and talk about it in the comments, below. I use a Diva Cup as a backup currently...but what if I can do this without the backup?? Am I ready?? --Andrea

Now it’s your turn...please comment below with whether YOU catch your blood in the toilet, or whether this article has inspired you to try!

We look forward to your comments!

Inspired by esoteric thought and Asian healing arts throughout her life, Jennifer Renee Chu is the founder and director of Little Ones Welcome, a holistic practice where she integrates Western and Eastern perspectives on Women's Health (including fertility, gestational, intrapartum and postpartum wellness). Jenn has been working with infants and children since 1995. She is a California Licensed Acupuncturist specializing in fertility, pregnancy, and pediatric care. She is also a DONA trained Birth/Post-partum Doula and a Mindfulness Based Childbirth Educator at Zuckerberg San Francisco General Hospital. Jenn holds a graduate degree in Traditional Chinese Medicine and is currently a Midwife Apprentice studying at the National Midwifery Institute.