Primitive "diapering" methods often involved placing soft, absorbent materials under baby's bottom inside the sling or papoose. Their purpose was to add extra protection during times of cold weather, travel, and busy-ness. Their purpose was NOT to serve as a full-time toilet.

Those early humans who did not need a "back-up" for their babies (ie: lived in a settlement, not as nomadic, and in warmer climates) simply carried baby around naked inside the sling when pre-mobile, and when they received a signal from baby that they were uncomfortable, they pottied baby through a "point and shoot" method - aiming them into the bush to relieve themselves hygienically. (The preference for hygiene is a deep survival instinct that all of us humans possess.) Then baby returned happily to the sling.

When babies were of crawling age, they simply were "toilet independent" in that they would crawl to the space that all the other humans relieved themselves, pee or poo, and then return to what they were doing.

(More than half the world's babies in current times are still toilet independent by 12 months old by the very same methods above, which we humans have used for all of human history.)

Cloth diapers became commercially available about 200 years ago. Their purpose was to add extra protection until the baby was able to crawl to the chamber pot or outdoors to relieve herself, and at the most, until the baby was able to walk (which is when all babies were completely trained to use the toilet). Their purpose, in the beginning (prior to the 1960s), was NOT to serve as a full-time toilet...but rather to protect the home environment until mobility allowed the child to be trained.

(One manual in the 1950's noted that any poop catch before the child was walking was bonus points! Here's a pic of how it was to catch such a pre-walking "pottytunity.") 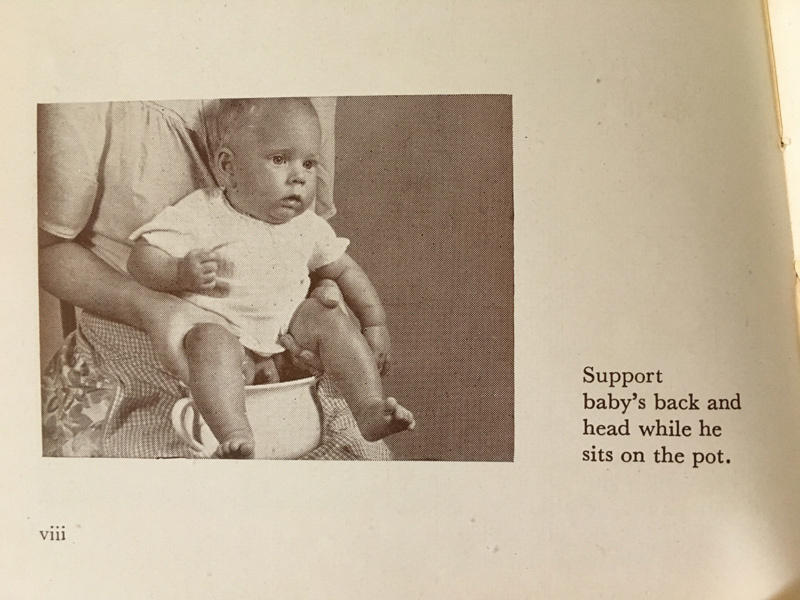 Disposable diapers hit the market in 1961. Mothers *hated* them. There was no way they were going to put paper on their baby's precious bottoms.

After doing so successfully, the diaper, from 1961 onward, morphed into a full-time wearable toilet.

Parents were taught by pediatricians to ignore their children's interest in the toilet, cast aside the developmentally-appropriate tradition of training before or upon walking, and to train their children INTO diapers, NOT the toilet, as had been done for ALL OF HUMAN HISTORY.

IN THE 1960s, THE DIAPER BECAME THE BABY'S PRIMARY TOILET. (Even cloth diapers!!)

You see, diapers were always meant to be "back-ups"....a TOOL to be used until mobility and/or the mother was tired of hanging diapers to dry. Toilet trained by 9 months old? Extremely common in the 1950s...and also common in current-day countries where there aren't disposable diapers (or their companies' exquisite marketing).

Delayed toilet training is a social trend...not a medical necessity, and certainly not in the best interest of baby's health or hygiene.

And now I'd love to hear from you:

In the comments below, please respond to this question: What do you believe about diapers, and have you ever truly questioned that belief, where it originated, and why you stuck with it?

Getting EC Back on Track: a minicourse that walks you through observation, logging, and getting back on the EC wagon

Potty Time Mastery: a minicourse that helps you get extremely good at detecting the 4 ways to know the baby has to pee

Posted in Blog, Myths, Philosophy, Starting
← How to hold a newborn baby over the pottyBranson’s 17 month Elimination Communication Update →